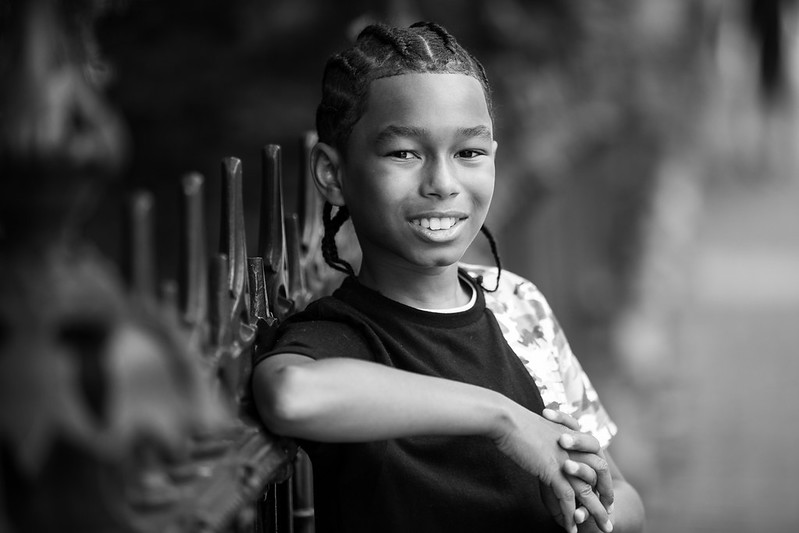 As Scholar Jules Charles proudly explains, he took on a new role for Steppingstone this year: Admission Ambassador.

The Park School seventh grader gets to share his experiences and answer prospective parents’ questions. He enthusiastically offers his thoughts on his education and his teachers and advisors. He finds one of his most common answers is “Steppingstone is amazing.” As a proof point, he emphasizes how it helped him get into Park, “this great school!”

“It’s like telling a story,” Jules explains. “When you’re talking about your experiences,” he goes on, “it’s a good feeling.”

In this milestone anniversary year, he enjoys putting into his own words what makes him “happy and grateful for Steppingstone.” He sees it as his way of preparing Scholars and parents alike for what’s ahead.

As his mom, Dulce Martins, recounts, their own Steppingstone story started when his fourth grade teacher introduced them to the idea. Since kindergarten, she’d appreciated that the staff at Saint John Paul II Catholic Academy in Dorchester Lower Mills would often recommend different programs for enrichment.

Dulce immediately liked what Steppingstone offered. At the same time, “I was a single parent, working two jobs,” she explains, and “for me, it was challenging.” Undaunted, the two went through the application and interview process together.

When Jules heard the news that he was accepted, “I was so pumped!” he says. In his heart, he knew that he was going to a wonderful school—and on his way to realizing his college dreams.

Jules came into Steppingstone with confidence, and his teachers and advisors steadily built on that base.

When it comes to favorite memories of Steppingstone summers, “I have many of them,” he notes. He loved playing daily games with classmates on the Milton Academy campus. His teachers continually created lessons to remember—from designing paper airplanes to examining human hairs under a microscope to reading “relatable stories” on diversity in books like The Liberation of Gabriel King.

If he could offer any advice for Scholars following in his footsteps, it would be to get to know your teachers and classmates and build your relationships. “It may sound cheesy,” he adds, but “making friends can be the best thing you do there.”

Importantly, he knows Steppingstone prepared him well for what was ahead.

At Home in a New School

When he and his mom looked at Park as a possibility for middle school, Jules admits that he worried about fitting in at first. It definitely would be a change from his small parochial school. So much would be new, including taking the bus for the first time. They visited multiple times, and became convinced that it would be the right fit.

After taking the leap, “honestly, Park was amazing,” Jules says. He lists “the education and everything we study” as his favorite part. “My second favorite part is making friends,” he says, adding that he likes to build deeper, lasting friendships.

From the start, “my teachers were welcoming and kind,” he says. They were also there to provide extra help, if needed. As a 7th grader in the middle of a pandemic, when he found himself struggling to stay on top of his work, the school’s academic support team was there for him.

In many ways, their support has reinforced the lessons that Steppingstone taught him. He’s finding himself better able to prioritize and balance his time and become more organized. Now, his stress has eased, and “I feel more on top of things in general.”

At the same time, he simply feels more at home. He and his classmates know each other better and are more naturally comfortable.

Seeing the Good in Everyone

Asked how those who know him best would describe him, the first three words that come to his mind are positive, kind, and generous. “I’m a happy person,” he explains. “I smile a lot, and that attracts people.” As his mom puts it, “he’s a big people person.”

“Jules sees the good in everyone!” Dulce adds.

Before the pandemic, he loved to keep busy in many ways, from drumming to mixed martial arts to school basketball. While with COVID, “everything stopped,” he looks forward to getting back to being more active and engaged.

In everything he does, he takes pride in being determined. “I try to do my hardest,” he says. “That gets me through a lot of things,” he says. “If I wasn’t so determined, or I didn’t do Steppingstone, I don’t think I would have achieved what I have so far.”

Dreams of the Future

Thinking about the future, “I’m definitely going to college,” Jules says, with his characteristic determination.

He imagines majoring in animation and art, and he dreams of one day being an animator and a game developer. The idea of bringing characters and worlds to life excites him. “I love games,” he says. Ever since he was young, when he plays, “he analyzes the games themselves,” his mom adds.

Jules realizes that creating a game is difficult, and that’s what he likes about it. He breaks game development down into four main parts: the story, animation, coding, and graphics.

He thinks big and loves to be creative. “I see things differently and try to be fresh and be new,” he reflects. “I want to be the best of the best. I want to pave the way for a whole new world of games.”

For Dulce Martins, as for many parents, the thought of Jules going to college was always in the back of her mind, even when he was very young.

Beyond how well Steppingstone prepares Scholars for what’s ahead, she reflects, for parents, too, “it’s a steppingstone.” The support and resources can be “a guide for parents who don’t know fully what to expect.”

As an initial step, when it came to applying to middle schools for Jules, she found herself feeling uneasy about navigating the admission and financial aid process. At times, she felt “overwhelmed.” Ms. Moore, Jules’ Steppingstone Advisor, proved invaluable. “She was amazing!” says Dulce. Now with high school admission on the horizon, she feels far more prepared and supported.

In the end, “it’s such a feel-good moment,” she adds. “When you get through it,” for parents as for Scholars, “you see all the work that you put into it was worth it.”