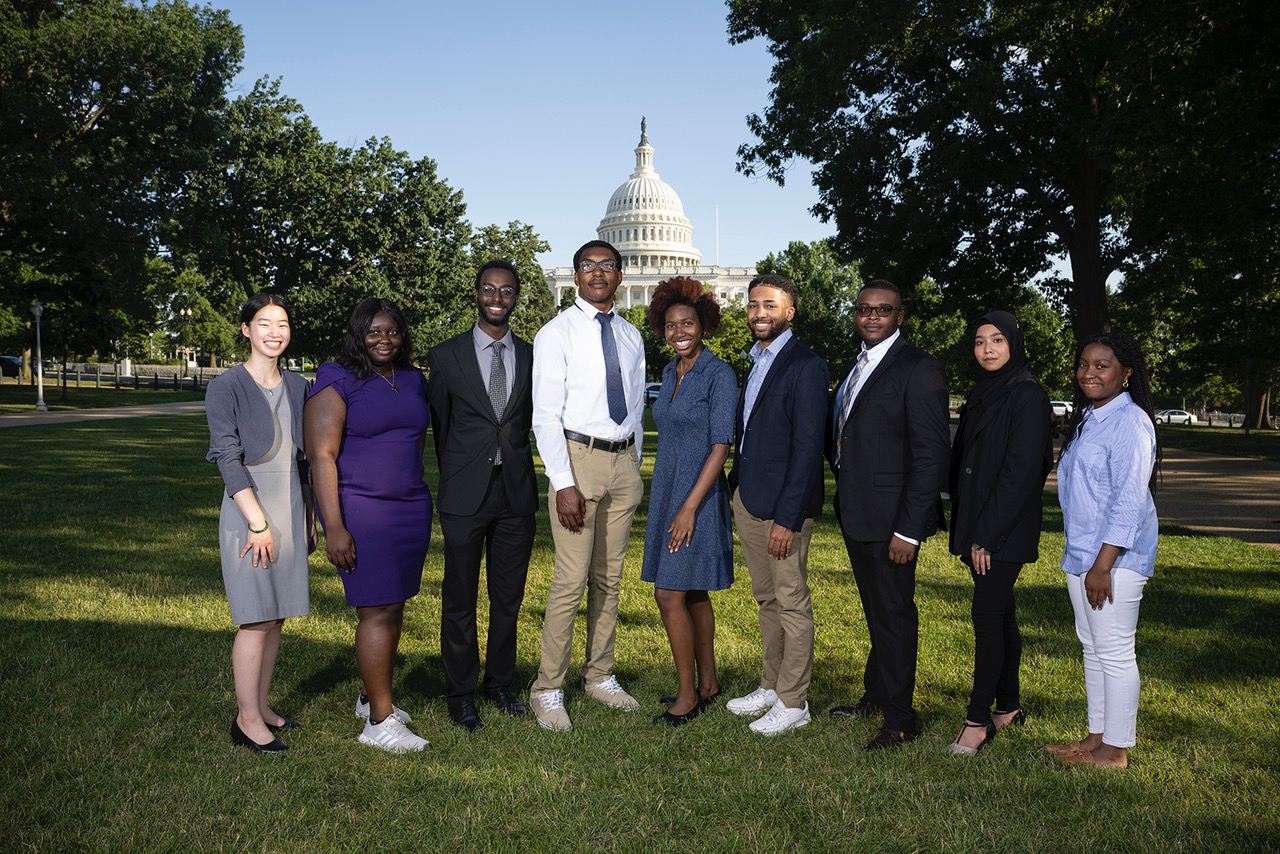 “Education is not only a ladder of opportunity, but it is also an investment in our future.”

Steppingstone Scholar Idiris Egal, a second-year student at Duke University, has a list of accomplishments in the world of political advocacy and politics longer than many people twice his age. With election season in full swing, it's only fitting we highlight Idiris’ path and gather his sage advice on how to get involved in political advocacy. He credits education, mentorship, and his Steppingstone community with leading to a variety of path-changing opportunities—the most recent of which brought him to Ed Markey’s office on Capitol Hill this past summer.

A Journey through Steppingstone

When Idiris' family introduced him to Steppingstone, it was the experience and the “truly incredible people” that fostered his love for the program. Idiris recalls attending Steppingstone classes after school and on Saturdays during middle school, and Steppingstone Advisors who aided him in his journey to Boston Latin Academy. He points out the importance of Steppingstone in addressing the achievement and opportunity gaps he witnessed as a high school student—“gaining skills and mitigating the difference between affluent students and those trying to access mobility.” Idiris recounts a special Steppingstone field trip to Dartmouth College in his time at Boston Latin Academy:

“I think what’s really beautiful about Steppingstone is the various types of activities across age demographics. I remember during my junior year I had the opportunity to attend a college tour at Dartmouth College. A group of us visited New Hampshire on a Saturday…and discovered this new place. We met with the people there and connected with students attending that school. I ended up applying to Dartmouth during my senior year and I ended up getting in.

“It goes to show that these experiences really go a long way in helping students understand ‘What is possible for me?’ and ‘What are the various opportunities that impact me?’, and how to maximize that for yourself. Steppingstone made sure that opportunities are necessary to helping me along my pathway. Those kinds of small moments really can turn into big moments in life.”

Nowadays, Idiris’ connection to Steppingstone looks a bit different than it did years ago. While he attends college in North Carolina and is physically separated from Steppingstone, the lessons he learned are still actively at play in his life. He describes, “I’m at the point in my life where Steppingstone forms my identity and character and I’m using all those skills and attributes I learned not only from the people that I’ve met, but the various opportunities and experiences that I had during my tenure and making sure I apply that to all aspects of my life.” Idiris credits his continued connection with Steppingstone Advisors and events through the College Success team as continuing his learning and love for his own community. It is the learning, longing to impact his community, and educational journey that have led him to his career in political advocacy.

A Call to Political Advocacy that Started in the Classroom

Idiris found his spark for politics while attending Boston Latin Academy. A lover of languages, Idiris found himself diving into Latin (a favorite summer class among Scholars), Ancient Greek, and Arabic. He immersed himself in social and political science classes that taught him about genocides and ethnic cleansings. Idiris had the opportunity to conduct research in these topic areas and promoted his sense of advocacy. These experiences led him to seek out opportunities in his local community, like working at the Boston Health Commission and Campaign for Leaders. This was the impetus for his move to study political science and human rights at Duke University where he received the full-ride University Scholarship. Though he has found himself in a new community, his learning and leading has not slowed. Idiris is a writer for Juris: Duke’s Undergraduate Law Magazine and a member of the Student Advisory Board of the Human Rights Center where he engages in important conversations related to domestic and foreign policy issues.

Idiris spent this past summer in the office of Massachusetts State Senator Ed Markey as part of the Judiciary Pod focused on domestic policy issues. As Idiris explains, it was a particularly rich and important time to be working in Washington D.C., as this summer was centered in protests over the Roe v. Wade decision, conversations about gun violence related to the mass shooting in Uvalde, Texas, as well as foreign policy issues like the war in Ukraine. Idiris remarks that seeing Congress staffers’ responses to these conflicts and engaging in discussions made clear to him the important impact of a career in politics.

Idiris’ summer was funded by the National Summer Learning Association (NSLA). The Congressional Summer Internship program received hundreds of applications from students from across the country, and in the end, Idiris was one of only 10 students awarded the opportunity. In addition to his internship, Idiris engaged in courses and events as well as mentoring and networking as part of the NSLA program that further richened his experience. One of the most important lessons from his NSLA professional development was addressing the racial divide between communities served by government officials, and those serving in office. The importance of networking, according to Idiris, is to create “access and opportunity for people of color or marginalized people,” in political careers.

Idiris pictured third from the left with fellow NSLA interns.

Idiris was struck by Senator Markey's dedication to his constituents as well as to his staff. He explains: “the staffers and all the various people [working on the Hill], were always recognized based on how integral they are to the work and he really appreciated them and every single moment. That was something that I really took to heart.” Idiris’ experience solidified for him that policy is the way to make community change, and a place where he wants to make a career.

A How-To: Getting Involved in Political Advocacy

Idiris explains that getting involved in political advocacy, no matter what age you are, comes down to three things: listening, learning, and humility. He also acknowledges the impact of networking and connection in discovering new opportunities to learn about political issues as well as one's own passions within the world of social change.

School is where Idiris’ spark for political advocacy began. He urges students to engage in coursework, particularly at the Honors and Advanced Placement level, that allows them to deeply dive into social issues that spark them. “Join activities with clear connections to politics, like student government,” Idiris shares, “but don’t be afraid to pave your own path and start clubs in interest areas. This will only allow you to discover more about your world of interest and bring a larger community of your peers in.”

“You can take action now.” Idiris shares there are always opportunities to intern or volunteer in the community—take City Hall, The Boston Health Commission or Boston Public Schools, for example. He adds, “although it's not clearly aligned to politics, these opportunities teach what advocacy can be done at the moment. These are all these learning experiences that will have an imprint on your brain and can help you to understand who you are and your personality.”

Idiris shares, “Humility goes a long way. Be open to what you don’t know.” With this in mind, Idiris attests that mentors are an important resource to access. Idiris credits his mentors in broadening his understanding of different types of careers, ways to achieve his goals and intended impact, and more connections to make. Idiris stresses the importance of finding mentors who recognize not just your weaknesses but also your strengths and values. Most important, Idiris says, is that mentors “aren’t just there for you; they are in for the reciprocal relationship. Invest time in those relationships—water them like plants on a regular basis. These people are fixtures in your life and career. Consistency is the most valuable thing. Find people you want to invest in and who want to invest in you.”

As a final piece of advice, Idiris shares, “Be gentle with yourself. Politics is a lifelong process. Have experiences and learnings that help you decide what is possible for you.”