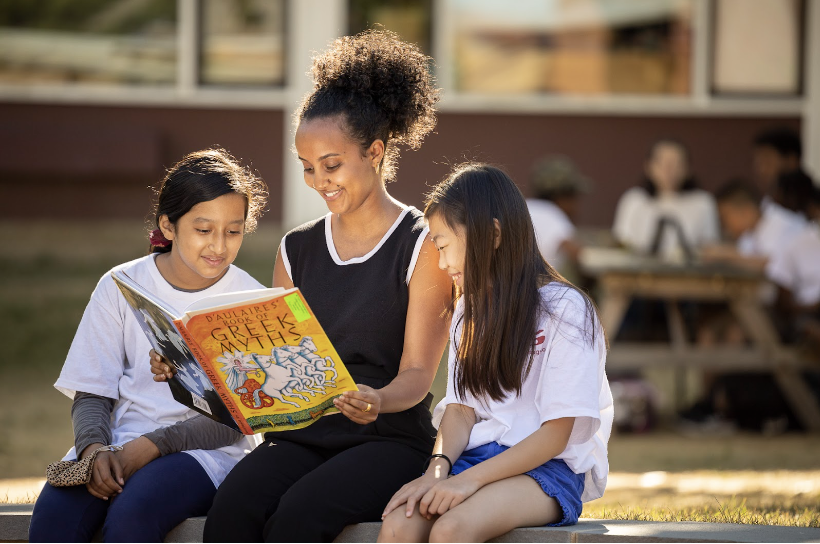 “I love storytelling. And I—love—hearing people share their story. Genuinely.”

Makeda Daniel ’09 is in a unique position within our community. She has more than 10 years of Steppingstone memories, and from myriad perspectives: as a Scholar, a peer leader, a teaching assistant, an Alumna, an Advisor. Now, as Manager of Alumni Relations, she builds community around the stories of many, with palpable enthusiasm.

Well before earning a B.A. in the history of science at Harvard College, with a minor in global health and health policy; before graduating as senior class president at Lexington High School, Makeda joined Steppingstone in 2009.

Looking back on her time as a Scholar, Makeda’s favorite memory is a community-building tradition: ice skating every winter at Frog Pond.

“It was like a reunion day.” Makeda recalls. “It's like, once you come outside, you look forward to every winter. Everyone would go from your class for the most part. And you also got to see your old Advisors.”

In particular, she thinks of Thanh Nguyen in these memories—her Advisor at the time, and now Steppingstone’s Director of High School Success: Makeda’s manager during her own time as an Advisor.

She laughs, remembering Thanh trying to teach her how to skate. “I was 13 at the time, and I was falling everywhere. And he'd be like, ‘oh, my God,’ running around…trying to make sure that I was good on all parts of the pond.”

Another Advisor who stood out was Luz Mederos-Dorleans, who Makeda worked with for most of middle school and high school. “I think I was pretty lucky to have an Advisor for five, six years, pretty consistently. I'm still really close with her, and so I hang out with her and her family all the time.”

Within these strong relationships, Makeda’s Advisors influenced the mentor she, herself, would become.

“[Ms. Mederos-Dorleans] definitely taught me the importance of collaboration and really being vocal about expectations and needs; and being honest about where you're at and where others can help you, help elevate you.

“That was a really transferable thing that I was able to apply in my professional relationships and my personal relationships…the values of honesty, self-awareness, but also being…brave enough to ask for help and not feel shameful for it, but almost feel very happy about it—understanding that it's a part of being human.”

As an Advisor, Makeda connected with Scholars in many ways—from guiding them through the college application process, to cheering them on at their football games.

Of all the memories, one stands out: meeting Scholars on her first school visit, as a new Advisor.

Makeda reflects that it was very rewarding “to give them the space to see that, and kind of build community—but also give them space to talk about their experience at school and as Scholars.”

She recounts Scholars’ reactions: “‘Thank God I can talk about this right now,’ or ‘Thank you for providing the space.‘” Makeda reflects, “I think for a range of 13 to 18 year olds, [Steppingstone] can be a light and it can be a great space for people to share…It was just very safe, very honest. And I don't take that lightly. That's huge.”

When Makeda first considered the role she now holds, she found herself reflecting that connection and community are equally important for Alumni:

“I think it’s a very special thing to be able to share your narrative with someone, without having to explain the nuances—especially when you're trying to reflect on challenges you faced, or environments you've been in, or things you're excited about or confused about…or what your goals are…It's less draining; it's a bit more fulfilling. It kind of gives you more energy. And I think being able to do that is great.

In addition to the value that comes along with shared experiences, Makeda notes how interesting it is to learn where everyone’s path has taken them after graduation. “There are so many people, so many Alums doing incredible work, that's very inspiring and so selfless—I'm like, I want to learn more. I want to know more about what you're doing, the work that you're investing yourself in, and how can I get involved?”

With that in mind, Makeda is interested in connecting Alumni not only with one another, but also with current Scholars. She elaborates, ”as an Alum, I want to give younger Scholars the space to ask a potential future version of themselves anything that they might want. It’s something that I think everyone should have, inside and outside of Steppingstone.”

Since starting this role in the summer of 2022, Makeda has initiated new platforms for these types of connections—including career panels, monthly newsletters, a brand new LinkedIn networking group, and more.

At the core of this role, for Makeda, is cultivating, sharing, and reflecting on stories. “I love being able to create a space where people feel safe enough to reflect. And so, it fills me up knowing that they feel so safe and so ready to share and relive both the different feelings and the beautiful parts of their narrative with me. I feel so honored when that happens. It can be something as small as telling me about your day. And that goes for everyone—Scholars, family members, strangers—anyone.”

In so many ways, Steppingstone’s Alumni community empowers the next generation of Scholars. If you would like to discuss opportunities to get involved as an Alum, please contact Makeda Daniel ’09, Manager of Alumni Relations, at mdaniel@steppingstone.org.